You are here: Home / Learn / The Coffee Species

The Origin of (Coffea) Species

When you drink coffee you are most likely drinking Coffea arabica, known colloquially as Arabica. This is just one of over 120 species of coffee identified to date. We’ll come back to Coffea arabica a bit later on. The other main type of coffee you may be drinking is Coffea canephora. A brand name of sorts, Coffea canephora is more commonly known as Robusta. The ability of the plant to withstand disease, as well as thrive in lower altitudes and higher temperatures led traders to describe the plant as “Robust”, hence the name Robusta. While it comprises 40% of global coffee production today, Robusta doesn’t actually taste that great. It is generally used in blends as a filler bean for the larger scale coffee roasters. The vast majority of coffee that is consumed globally is Arabica.

The coffee world has assumed for quite some time that Arabica and Robusta are distant relatives, considering their global proliferation and consumption. Interestingly, after sequencing the genetic code of both plants, it was found that Robusta is actually the parent of Arabica. Coffea arabica, coffee as we know it today, is courtesy of two main species: Coffea canephora (Robusta) and Coffea euginoides. It is likely that these two species of coffee crossed somewhere in the south of Sudan and birthed Coffea arabica. Their offspring spread dramatically throughout Ethiopia, which is still considered today to be the birthplace of coffee.

Pests and Afflictions of Arabica

Arabica is already prone to diseases, such as coffee leaf rust, and subject to pests like the coffee berry borer. Coffee leaf rust is a fungus which, while appearing to merely be cosmetic, has tremendously detrimental impacts to the coffee quality and crop yield of the plant. Coffee is also the obligate host of the plant and, without coming in contact with the Coffea species, the fungus cannot survive. Globally, it is estimated that coffee yield is reduced by 15% due to coffee leaf rust.

The coffee berry borer, also known as the coffee borer beetle, is a very tiny beetle considered to be one of the most harmful pests to the various Coffea species. Native to Africa, it has spread across the globe to impact nearly every coffee-producing nation. The beetle will bore through the center of the coffee cherry and lay eggs, thereby increasing its impact on each plant. Each infected berry can house up to 150 beetles in a given season. Plantations afflicted by coffee borer beetle infestations can lose 30-35% of crop yield with 100% infestation at harvest. If you’re interested in learning more about the measures being taken to prevent the spread of the coffee berry borer, check out this detailed article from the University of Hawaii.

Variations on the Coffee Tree

Every coffee tree within the Coffea Arabica species can be a bit different. They all have slender trunks with many branches. Depending on the variety within Arabica, they can have different fruit yields of various colors. Some fruit ripens to be a deep red and other fruit ripens to a goldenrod yellow. Varieties that produce yellow fruit generally aren’t used in the industry because it becomes difficult to tell whether the cherry is underripe, ripe, or overripe. Some have clusters of fruit, while others have fruit dispersed along each branch. Interestingly most coffee producers choose their variety based on its resistance to disease, not necessarily the flavor. The resistance of the plant has the greatest impact on the profitability of the coffee farm.

Growing a Coffee Tree from Seed

Coffee beans must be planted in fertile soil. When they germinate, a thin green shoot will extend from the bean, lifting it from the soil. At this point they’re called soldiers. Rather comically, they look like a coffee bean was glued to a sprout. Soon after this, the bean opens to reveal bright green leaves. Within 6-12 months, the plants can be moved from the nursery and planted. Coffee plants take more than 3 years to produce fruit. This is an incredibly limiting aspect of the coffee growing industry; if you make the financial investment in becoming a grower, you have a lengthy period of dormancy before you will produce any yield of substance.

The Fruiting of the Coffee Tree

After a tree has matured and capable of fruiting, it will flower once to twice a year with white blossoms that have a scent similar to jasmine. The first blooming is triggered by a prolonged period of rainfall. The second blooming often has a substantially reduced yield. Arabica is a self-pollinating plant, so that does remove some variability from the harvest each year, as compared to other growing industries. After the coffee blooms, the flowers will give way to the coffee cherries, provided the flowers are not shaken from the tree by inclement weather. It takes up to 9 months until the fruit is ready to harvest after they trees have bloomed. Cherries don’t ripen uniformly, so they must be harvested in cycles or the grower risks under- and overripe cherries. We’ll go more in-depth on the how coffee is harvested later on. 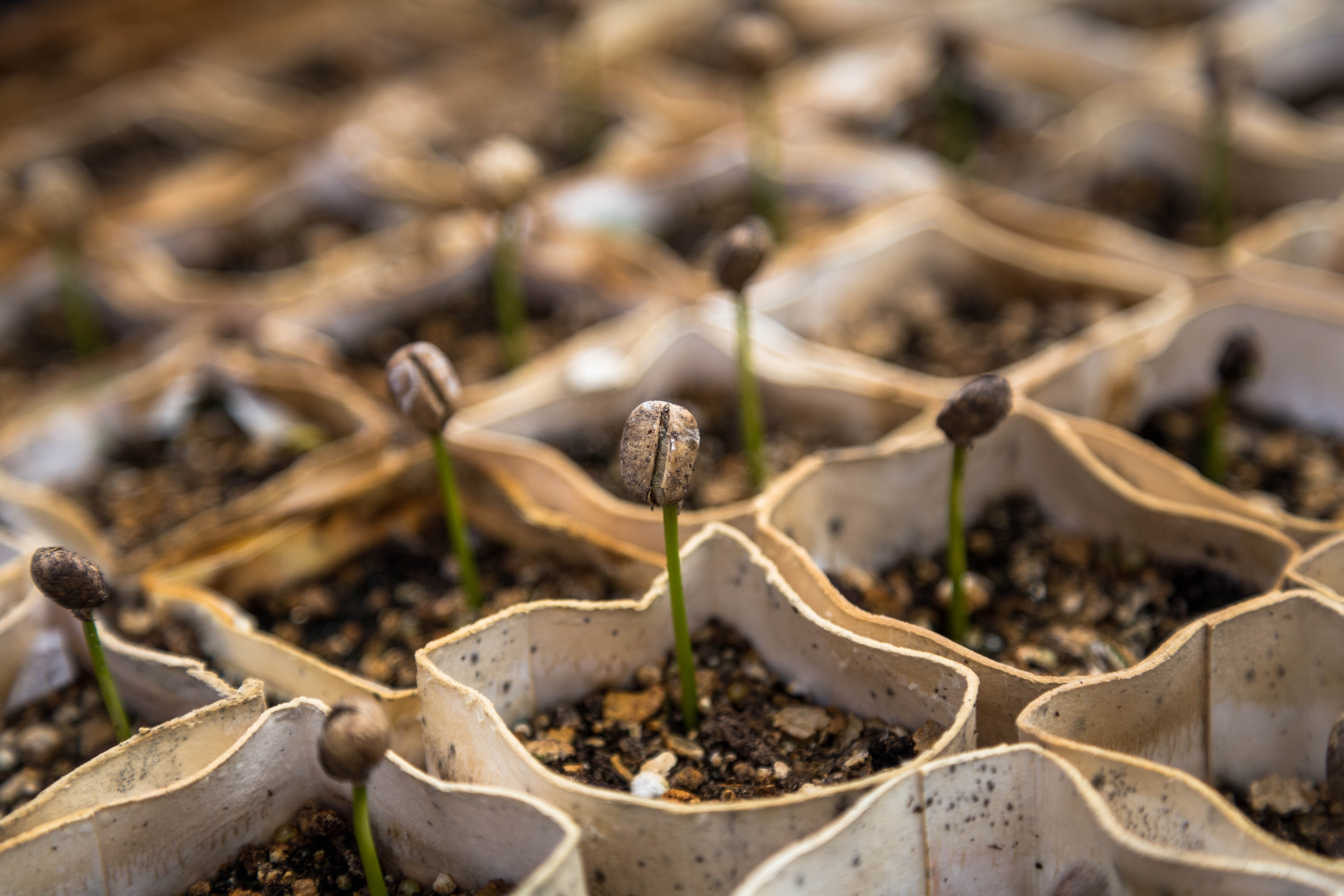 The coffee fruit ranges in size depending on the variety of coffee, but is generally the size of a small grape. Each coffee cherry is comprised of a skin, pulp, parchment, silverskin, and seed.

Coffee Seed or Coffee Been?

The coffee seed is known as a coffee bean because of its resemblance to a legume. Each coffee cherry has two coffee seeds contained within it. The exception is when only one of the coffee seeds germinates, resulting in a rounded, smaller seed known as a peaberry. These coffee beans are separated from the remainder of the standard crop due to their small size. We will go into the grading of coffee in a later post.

Flavor of the Coffee Fruit

Other Uses for the Coffee Cherry

Companies are beginning to market products containing the coffee cherry skin, pulp, and parchment. It is being branded as “cascara” which is the Spanish word for husk. The most notable product that has been developed out of coffee harvesting byproducts is coffee cherry tea. Although it is considered to have high levels of caffeine, a particular selling point, it actually substantially less caffeine than coffee. Details on the caffeine content can be found in this post. Big coffee retailers, such as Starbucks Coffee, have begun to cash in on the coffee cherry movement through beverages like the Cascara Latte, which has sprinkles of dried coffee cherry pieces dashed across the latte’s layer of thick milk foam.